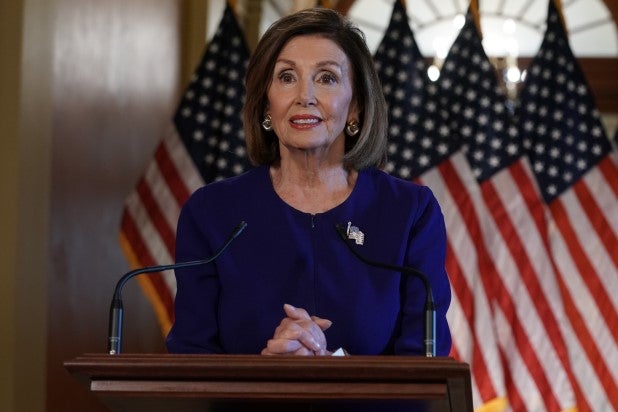 “What deal can we have, Crazy Nancy?” the longtime host asked.

He went on, quickly correcting himself and adding, “I’m sorry. That was the president. I have such reverence for the office. I would never use that term, but it is hard –“

Cramer used Twitter to clarify further after the segment aired, writing, “It disgusts me that she is called ‘crazy Nancy.’ She has spent her whole life in public services. My critics didn’t listen to why i mentioned it-because it is horrifying.”

The clip picked up steam on Twitter as viewers expressed distaste for Cramer’s use of President Donald Trump’s nickname for the Democratic leader, who is third in the line of presidential succession.

Numerous observers hit him for his stock picks, which they said were ill-informed and “wild,” while others called on CNBC to fire him. A representative for CNBC did not immediately return a request for comment on the moment.

“Jim Cramer’s blatantly sexist and wholly inappropriate attacks on Speaker Pelosi, are deeply troubling and raise serious concerns about Cramer’s objectivity when covering women in positions of power. Make no mistake, Cramer used his position on CNBC to laugh in the face of the highest ranking woman in the United States, while she was explaining the need for additional coronavirus relief for America’s families,” she said, adding that “to remove toxic misogyny from its airwaves,” CNBC should fire Cramer.

Other observers, of course, reveled in the use of the Trump moniker, posting gifs of the president celebrating or branding the segment “awesome.”

Pelosi said during her interview that that she is still opposed to GOP efforts to pass a smaller version of the Democratic coronavirus stimulus plan.

He just called Nancy Pelosi, “Crazy Nancy” – to her face, during an interview. pic.twitter.com/pzQmCG6Cnb

By Tuesday evening, Cramer had apologized, calling his remark a “very stupid comment.” He said it was a “tongue-in-cheek attempt to make a point about the harsh tone of the negotiations in Washington. But it fell completely flat, and I apologize for that.”

Stars Who Have Tested Positive for COVID-19 (Photos)

Dwayne Johnson, Kevin Hart and Brian Cox are among the many stars stricken by the novel coronavirus

As the coronavirus (COVID-19) pandemic continues to spread, even the Hollywood community has been affected. From actors to executives, here is a list of confirmed celebrity coronavirus cases.

US unseals charges over kidnapping of journalists in Afghanistan

US consumers brace for COVID-19 surge by hoarding food – again

This Week on Christmas Island: 50 Million Crabs Scuttle to the Ocean

Apple TV app on its way to Xbox and Playstation consoles

US unseals charges over kidnapping of journalists in Afghanistan