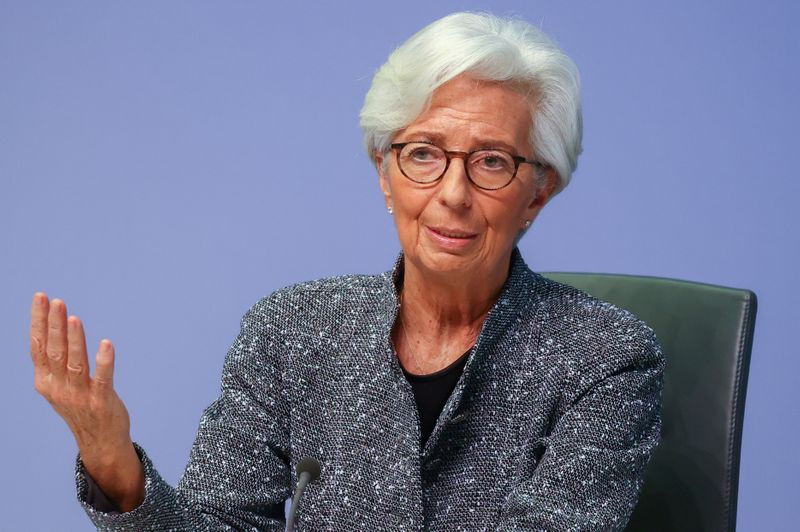 © Reuters. FILE PHOTO: FILE PHOTO: European Central Bank (ECB) President Christine Lagarde gestures as she addresses a news conference on the outcome of the meeting of the Governing Council, in Frankfurt

FRANKFURT (Reuters) – Five European Central Bank policymakers, including President Christine Lagarde, floated proposals on Wednesday for changing how the ECB goes about the business of steering price growth in the euro zone.

With the ECB in the middle of its first strategic review in nearly two decades, proposals ranged from buying more green bonds to letting inflation overshoot the symbolic 2% threshold — to doing nothing at all.

The ECB has undershot its goal of keeping price growth “below but close to” 2% for nearly a decade. And just as the coronavirus pandemic causes prices to fall, it is now debating whether and how to change that target.

Policymakers speaking at different events throughout the day acknowledged that some of the reasons for the sluggish price growth were beyond their control but their responses sometimes differed.

French central bank governor Francois Villeroy de Galhau proposed saying that the ECB would “accept inflation higher than 2% for some time without mechanically” tightening policy, in a bid to boost expectations about future price growth .

This would be a variation on the Federal Reserve’s new goal, which is a 2% inflation rate on average over an unspecified period. It would give the ECB greater flexibility by not tying it to an arithmetic mean.

His Finnish peer Olli Rehn argued roughly along the same lines, calling for “a clearly and genuinely symmetric” target accompanied by forceful action to correct any deviation in either direction.

However, ECB board member Yves Mersch was unconvinced that the ECB’s target needed changing as it had proven successful over a 20-year horizon.

He also argued new structural forces, such as global supply chains and a more tenuous relationship between unemployment and price growth, meant that old economic models were now outdated.

“We cannot continue to chase ghosts that do not exist any more,” Mersch said.

Lagarde had kicked off proceedings in the morning, throwing her weight behind the idea that the ECB would favour green bonds when buying corporate credit to make up for the market’s failure to do so.

This would imply ditching the ECB’s sacred principle of market neutrality, which forces it to buy company bonds in proportion to their outstanding amounts, as suggested by ECB board member Isabel Schnabel recently.

“In the face of what I call the market’s failures, (there) is also a question we have to ask ourselves as to whether market neutrality should be the actual principle to drive our… asset purchases programme,” Lagarde told a United Nations event.

“Climate change does concern many aspects of monetary policy, including inflation, economic growth, interest rates and the transmission channels of our instruments,” Holzmann added.

HOW TO START A NEWSLETTER: Everything you need to know about building an audience and making money off your writing

Lee Kun-hee, who made South Korea’s Samsung a global powerhouse, dies at 78

Epic can continue to support Unreal Engine on Mac and iOS...

Christopher Romanowski - October 13, 2020 0
While Epic and Apple’s legal battle over app stores isn’t due in court until next year, one important matter is settled for now: Epic will get the keep the Apple developer accounts which let them update and maintain Unreal Engine on Mac and iOS. Apple had threatened to disable those too, not just the accounts…

Will the Real Aaron Rodgers Please Stand Up?

10 Tiny Organization Tasks You Can Finish in 10 Minutes (or...

Cohen: ‘There will never be a peaceful transition of power’

Even the Most efficient AI Fashions Are No Match for the...