The Premier League season is up and running – and Liverpool’s title defence began with a thrilling 4-3 win against promoted Leeds United.

Have a look at my team of the week – and then have a go at creating your own at the foot of this piece. 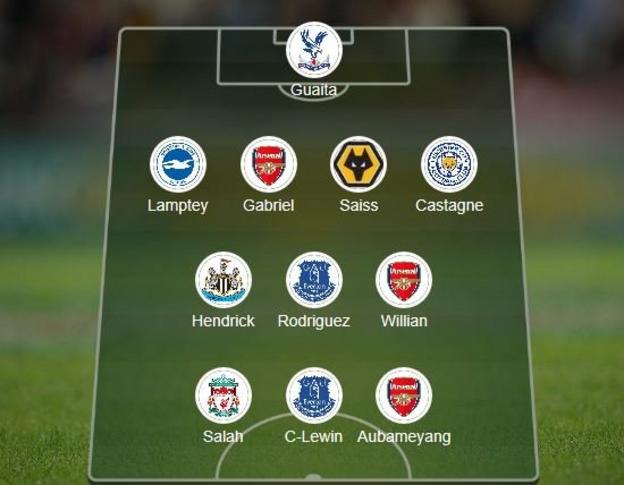 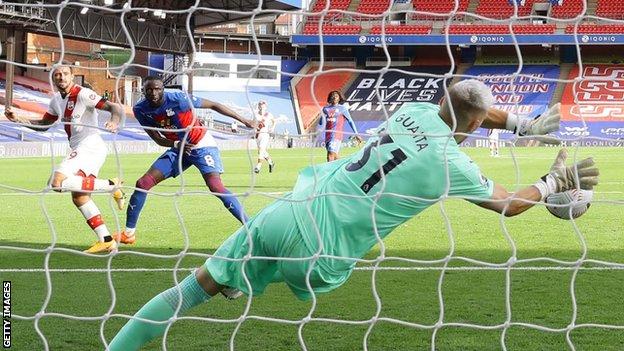 Guaita: One save from Che Adams and another from Danny Ings produced Crystal Palace’s first victory in nine league matches. Wilfried Zaha may have scored the only goal against Southampton – but Vicente Guaita won the match.

I saw Guaita produce some very shaky performances towards the end of last season. And once Palace were mathematically safe, Zaha’s displays dipped. Fortunately, both men were in a very different mood against Southampton.

If Palace are going to avoid another relegation fight, then Guaita needs to be at his best – and Zaha has to score far more goals in order to justify his price tag.

Did you know? Vicente Guaita made five saves to go along with his clean sheet against Southampton. Only once has he made more saves while keeping a clean sheet for Palace (eight against Brighton in February). 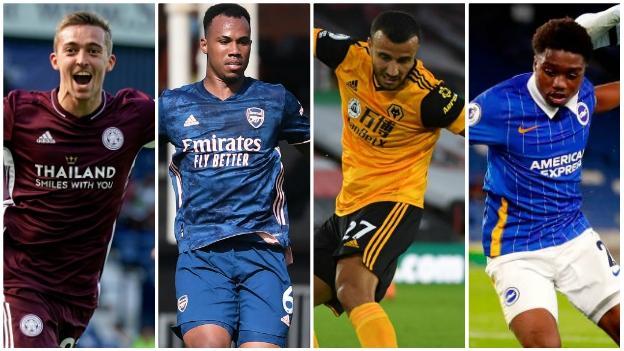 Castagne: Leicester were 3-0 up at The Hawthorns and they had hardly broken a sweat. West Brom had spent so much energy trying to contain the visitors, it was only a matter of time before cracks began to appear in their defence.

It was Timothy Castagne who made the breakthrough – and the fact that the defender turned up in the Albion box in open play says about as much as anyone can about the way Brendan Rodgers wants his team to play.

It’s always a very good sign when players other than strikers want to score goals.

Did you know? Timothy Castagne became the fifth Belgian to score on his Premier League debut, after Luc Nilis, Thomas Vermaelen, Christian Benteke and Leandro Trossard.

Gabriel: I thought Arsenal’s first-half performance at Fulham was impressive, especially the contribution of Kieran Tierney. However, it was Gabriel who caught my eye.

The 22-year-old Brazilian looked commanding at the back and comfortable on the ball. Arsenal seem to benefit from the inspired additions of Gabriel and Willian to the set-up – and they suddenly look a team with options.

Fulham, meanwhile, appear hesitant and lacking in quality, particularly in the last third. Unless they can get Aleksandar Mitrovic fit and scoring goals, I think the writing might be on the wall already.

Did you know? As well as becoming the 10th Arsenal player to score on his Premier League debut, Gabriel also completed 108 passes (of 114 attempted), at least 24 more than any other player in this game.

Saiss: This was an outstanding performance by Wolves – and in particular Romain Saiss – at Sheffield United on Monday.

The Moroccan defender scored a fabulous header and had another flash by the post with Aaron Ramsdale beaten. He then joined a breakaway attack and forced the Sheffield United keeper to push a terrific shot on to the post – before heading off the line at the other end to deny the Blades a certain goal.

The Wolves defender had a great game.

Did you know? Goalscorer Saiss registered a joint-team high 45 passes in the win at Bramall Lane, completing 89% of them (40).

Lamptey: It was a comfortable win for Chelsea in the end on Monday – although there was a point when I thought they were making hard work of it at Brighton.

I sense Brighton will have another season fighting relegation but there is a bright spark in their ranks and his name is Tariq Lamptey. I saw him come on as a sub for Chelsea in what was his Premier League debut against Arsenal last December and he was outstanding. However, in order to get game time, he decided to move on from Stamford Bridge.

I have no doubt he has made the right decision. And if he keeps playing like he did against Chelsea, he won’t be at Brighton for very long.

Did you know? Lamptey provided the assist for Trossard’s goal and embarked on a joint-game-high five dribbles. 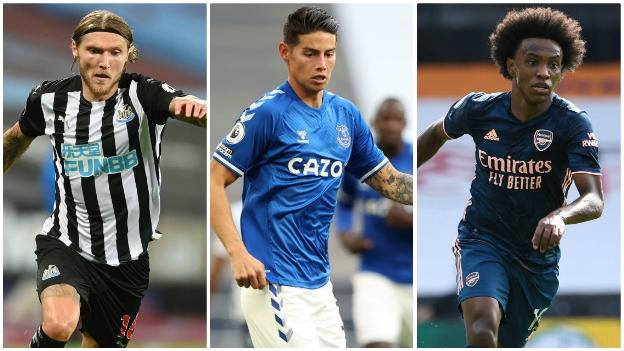 Hendrick: At West Ham, there were a number of impressive displays by Newcastle’s new arrivals. The pick of the bunch was Jeff Hendrick.

As well as being smart with the ball, Hendrick has an acute eye for goal. He set up Callum Wilson’s debut finish before hitting a lovely strike past Lukasz Fabianski to put the game way beyond the Hammers.

This time last season, Steve Bruce was arguably the most unpopular man in the north east. He is now considered a very credible manager, having created a team worthy of the area.

Meanwhile, West Ham continue to create headlines for all the wrong reasons.

Did you know? Jeff Hendrick both scored and assisted against West Ham – it was the first time he has done so in the Premier League in what was his 123rd appearance in the competition.

Rodriguez: When I heard that Carlo Ancelotti had lured James Rodriguez to Goodison Park, it was clear Everton’s days of mediocrity were over.

The Colombia international looked extremely comfortable in a new-look midfield that outclassed Spurs.

With Allan and Abdoulaye Doucoure alongside Rodriguez, the Toffees seem very capable of at least a top-six finish.

Did you know? James Rodriguez became the first Premier League debutant to create at least five chances since Alexis Sanchez for Arsenal in August 2014.

Willian: Regular readers will know what I think of Willian as a player. I said last season that Chelsea could not afford to lose him. To let him go to London rivals Arsenal, of all teams, was madness and could cost them dearly in the final analysis.

Against a Fulham side who were out of their depth, Willian produced a debut performance that must have been an agonising watch for his former manager Frank Lampard. The Brazilian was merely finding his bearings with a free-kick that flew past Fulham keeper Marek Rodak and hit the post. He left Craven Cottage with two assists under his belt, and a 3-0 victory.

What have Chelsea done?

Did you know? Willian became the first player to assist two goals on his Premier League debut for Arsenal since Ray Parlour did so against Liverpool in August 1992. 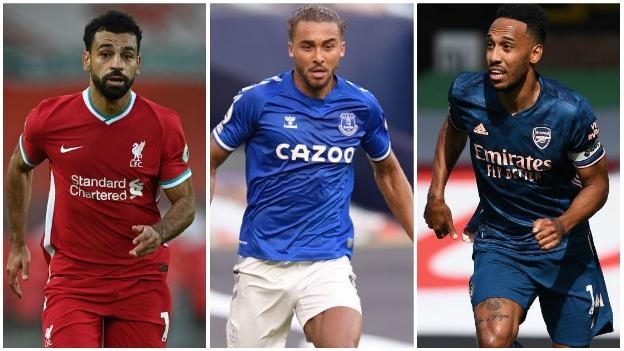 Salah: What a way to reintroduce yourself to the Premier League after 16 years. I’ve never seen a side come up from the Championship and go toe-to-toe with Liverpool as Leeds United did on Saturday. This was at Anfield and not Elland Road, by the way. I thought Leeds were magnificent. The question now is: Can they turn performances like this into points? It needed another inspired performance from Mohamed Salah to get the title holders out of trouble.

If other teams can take games to Liverpool in the same way Leeds did, then we are in for one hell of a season.

Did you know? Mohamed Salah scored his 50th, 51st and 52nd home Premier League goals against Leeds. He reached 50 home goals in 63 appearances – only Alan Shearer (47 apps) has done so quicker.

Calvert-Lewin: The header by Dominic Calvert-Lewin at Tottenham was worthy of winning any match. In fact it was so good, that any further consideration to include Jamie Vardy or Callum Wilson in my team of the week was suddenly out of the question.

Under Carlo Ancelotti, this lad is getting better with every game. It could be a defining season for the young Evertonian. He has all the elements to make a top-class striker. If he can stay fit, which invariably means looking after himself, he can be whatever he wants.

Did you know? Dominic Calvert-Lewin is Everton’s top scorer in Premier League games under Carlo Ancelotti with nine goals in 21 appearances.

Aubameyang: I have enormous respect for Scotty Parker but what do Fulham expect their manager to do with little or no money? Create genuine goalscorers out of nothing?

After 57 minutes, Fulham were 3-0 down at home to Arsenal, with the home side having had only one serious shot on goal. Meanwhile, Alexandre Lacazette, and the star of the show, Pierre-Emerick Aubameyang, showed Fulham’s strikers what predatory instincts actually look like.

Aubameyang’s goal was in a different class. Come to think of it, so were Arsenal.

Did you know? Pierre-Emerick Aubameyang became the first player to score on the first matchday in consecutive Premier League seasons for Arsenal since Robert Pires in 2003-04 and 2004-05.

The Crooks of the Matter

It looks as if sense has finally prevailed. The decision by Jon Moss, at Crystal Palace on Saturday, to reverse the dismissal of Southampton defender Kyle Walker-Peters after consulting video evidence is, in my opinion, a major breakthrough. At last it seems as if referees have found the courage to take back control of the game and not be dictated to by Stockley Park.

Regular readers will know how appalled I have been by the stance shown last season by so many referees, who seemed to rely on decisions made by others and refused to take matters into their own hands. There were even times when they allowed the game to descend into chaos.

If an official is in any doubt, then seeking the support of video evidence is a strength, not a weakness. Of course, referees will make mistakes – but they must be their own mistakes.

The referee is in charge of the game and his decision is always final. Nothing, but nothing, should ever interfere with that golden rule.

Make Yourself an Elaborate Sandwich

Jon Gruden tricked his Raiders gamers into pondering he had coronavirus

A insist-by-insist e book to vote casting by mail and early...

ABOUT US
Do you want to read the latest news and updates from your favorite blogs all at one place? If so, then Morning News is the best websit for you.
Contact us: [email protected]
FOLLOW US
© Copyright©2020 wwwalbahuth.info
MORE STORIES
Sports

Blues will play Canucks in Western Convention First Round