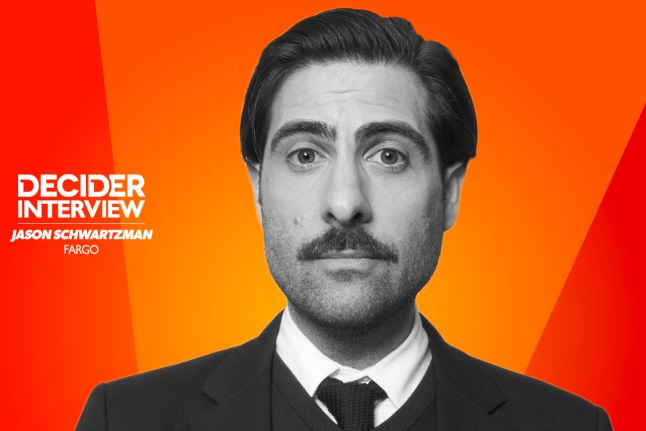 Fargo may be returning with an all new story, but it would be a mistake to ignore its past. According to Season 4 star Jason Schwartzman, this season is hiding all sorts of callbacks for dedicated fans.

Set in the 1950s, Schwartzman plays Season 4’s Josto Fadda, the eldest son of the Fadda family. In a world where the most powerful crime families in Kansas City trade sons as a security measure, his character has one of the most complex arcs about what it means to be powerful, who is allowed to have power, and what it means for the child of an immigrant to be American. At the Television Critics Association’s 2020 winter tour Schwartzman talked to Decider about juggling the Fadda family’s language barrier and teased a couple of Easter eggs hiding in this new season.

Decider: What was your first impression of Josto Fadda when you read his name?

Jason Schwartzman: Great question. It’s funny — I first heard about that when Noah wanted to meet. I didn’t see the character’s name, I heard it. I sat down with Noah. He said, “So, I’ll tell you a little bit about the character. You play Josto.” And it’s like getting your soccer jersey number or something like, “Yes! I am No. 3.” It’s that kind of a moment when you get that kind of a thing, and you’re Josto. I love the name Josto. I’ve come to use it. In fact, often, at the coffee places, they say, “What’s your name?” I say, “Josto.”

Josto seems to be at odds with his father. It looks like there’s going to be an upheaval. Is that the direction we’re going?

There’s some tension with my father. I would say that I want him to like me. And it is tense.

I was looking at the cast on stage, and it’s so cool because it’s a sprawling story and a vast cast. We read the scripts, reread them, but at a certain point you’re honing in on your story and your storyline… We each represent a different percentage of a cocktail. A big part of mine has to do with family, and fatherhood. Brotherhood. Being a first generation Italian-American. Who are you? Are you Italian? Are you American? Which direction, and how close am I to my father? And his father? Or am I about the future?

And where do you belong? There’s no clear place.

Yeah. So when I’m looking at us in this thing, I represent a big part of that. I represent an American whose father doesn’t speak English. That’s the thing I feel is a big part of my role and the responsibility that my character feels towards that.

It’s always been a question as to how much Italian should I speak? I don’t know about you, but I grew up with many friends whose parents didn’t speak English as well. They would reprimand their child in a different language, but the child would yell back in English. They would say something in a different language, and the kid would say it back. “He’s not gonna spend the night!” Like, guys. I know what we’re talking about now. There was a little bit of that, what language. And the power that whatever language I choose to speak is going to be a bit of a power play. So it’s been fun to do that. It’s been fun, actually, to speak English. I’ve been learning so much about Italian Americans through this process, my own family even. It’s funny, because I made a note in my script one time as a joke, saying I should say to someone, “Speak American to me.” And that was actually a campaign.

I didn’t know that.

Speak American campaign. Yes. Because it was a lot of Italian Americans. The kids it was like, what are you bringing your pasta and lunch for? Eat oatmeal! Speak American! This is white bread. So it’s a bit of that: Where do I fit in? I don’t want to be closed off. Who do I belong to? I think that’s what my character’s going through, big time. And who is in charge of it?

On top of that you as Josto have a rivalry with Rabbi Milligan, your Irish adopted brother. You’re both kind of competing for Dad’s attention.

Yeah, for sure. Also, our story — I slept in his bed, he slept in mind. We have that between us.

There’s got to be some resentment, even in the best case scenario.

I could see that, yeah.

It’s such a powerful thing: my father is proud of him for doing that. My father, in the show… There’s a ton of that stuff. Boys fighting for attention, but what gets them attention? What are they being rewarded for?

Absolutely. I also noticed at some point in the pilot, your character says “Aces,” which was one of Season 1’s most memorable catchphrases. Was that a throwback to Lorne Malvo?

I think so. But it was a throw-forward, in a way. It was a throw-front. Yeah, that was like a forward pass, it wasn’t really lateral.

There’s all kinds of cool references. I’m such a dummy. I love the show, and one time on set, Noah’s like, “Say aces.” I’m like, “Okay!” And then I was like, “Aces. Yeah, I love aces. Those are great. Yeah! Aces!” And then I was watching — I’ve watched each season now four times. It wasn’t until the second or third time that I was like, “Son of a bitch. I’m saying aces, that’s a reference to that.” So it’s pretty cool. It’s pretty cool to be a part of something that is connected but not necessarily rooted. Because it’s not so linear.

There’s a scene, I’m pretty sure, in Season 2 — I’m watching this scene with Nick Offerman at a bar, and I’m going, “I know this speech.” And then I’m like, “Oh. This is a speech from The Big Lebowski. John Goodman’s doing it.” I love that — not pastiche, what’s the term? Kaleidoscopic. Collage feeling. It’s a collage.

And it feels organic to the scene.

Yeah, it does… It’s funny, I read somewhere a long time ago that these shows are meant to be watched multiple times, but I was like, “Who’s got time to watch something multiple times?” I’m telling you, they’re so rewarding. Because you’re like, “Oh, shit. Oh, oh my god. I didn’t — oh, no. What?” There’s a lot of that happening all the time. I was just working on a scene — I can’t say too much — with a character that I realized, “Wait, this name sounds familiar.” It’s pretty exciting.

New episodes of Fargo Season 4 premiere on FX Sundays at 9/8c p.m. and Mondays on Hulu.

Where to stream Fargo

As Covid-19 Sweeps Europe, One Country Tries to Test Everyone

Charlton Athletic: League One club cannot be sold before 9 September

Christopher Romanowski - September 2, 2020 0
Charlton start the new season on Saturday with an EFL Cup trip to Swindon TownCharlton Athletic cannot be sold until 9 September at the earliest after a further ruling by the judge who refused to grant prospective owner Paul Elliott an injunction to prevent a sale to anyone else.In a further twist to an already…

The race to collect the pandemic’s history—as it unfolds

University of California Can No Longer Use ACT, SAT Scores in...